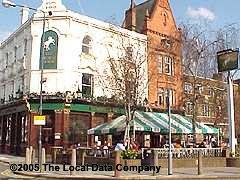 December 5, 2011 (Powerhomebiz.com) Augmented reality or ‘AR’ for short is a form of technology which fuses computer generated images with the real world. Aspects of the real world are enhanced or augmented by these images to create new ways of seeing things which leads to new experiences.

This differs from virtual reality where the emphasis is on replacing the real world with a computed generated one where a person is able to move around and interact with virtual objects in that space.

This technology may be viewed as a gimmick by some people but there others who believe that it can be used as part of an overall mobile marketing strategy. AR is often used in gaming, architecture, healthcare and entertainment but has gained a foothold in the mobile technology sector. Augmented reality is used with desktop applications but has also entered the mobile market. Mobile app developers are using this technology to create apps which act as a form of marketing, e.g. enable a person to view product information as they point their phone directly at it.

How does this technology work? You point your phone at a particular area of interest, for example a high street store, which then displays its latest offers. These offers can only be seen via the screen on your phone where they appear as digital text overlaying the actual high street store.

In other words, this computer generated text is merged with the real world image. And this can be used to drive personalised information to you via your phone as a form of targeted marketing. You are shown a series of images and text which match your personal preferences.

An augmented reality mobile app can consist of text, photos, video and audio. The idea behind this is that it becomes a part of what you are looking at to the extent that you are unaware of its presence. The aim is for immersion rather than distraction.

It’s an impressive form of technology which could be seen as a new form of user interface, especially for touchscreen mobile phones although there are various issues to consider. These include usability, accessibility and the context of use which applies to both mobile and non-mobile websites.